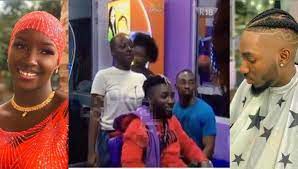 It seems like Saskay has fallen for fellow BBNaija season 6 housemate, Jaypaul.

This comes after the duo were caught kissing under the duvet on Wednesday, September 1.

Recall that it has been a triangle between Saskay, Jaypaul and Cross.

READ:  How We R*ped, Robbed And Killed Female Trader For Rituals

However, she had in the past said she likes Cross but sees Jaypaul as a friend.

However, it seems she is more interested in Jaypaul as they have been spending time together and have been spotted cuddling in bed on different occasions.

Cross, who is the most-sought after male housemate, has been left frustrated by her not reciprocating his feelings as expected and complained to her on Wednesday.

He said he is confused because she says one thing and does another thing, adding that he’d stop talking to her completely if he discovered that she is “fake”.

But shortly after their conversation, Saskay went to bed and was spotted locking lips with Jaypaul under the sheets.

However, it is not certain if she has chosen Jaypul over Cross.

Watch the video below,