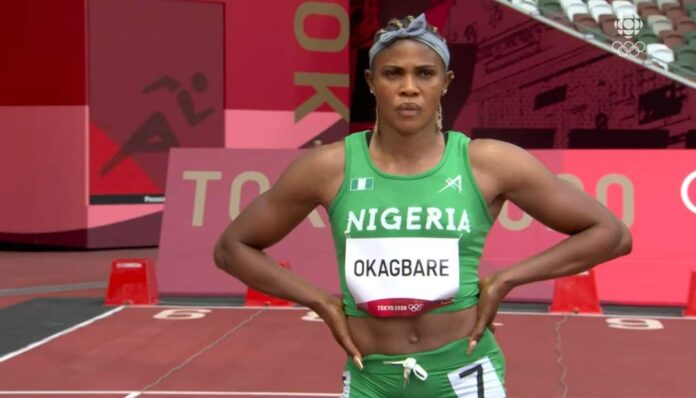 Nigerian sprinter Blessing Okagbare has been provisionally suspended and will miss the remainder of Tokyo 2020 after testing positive for human growth hormone.

The world and Olympic medallist failed an out-of-competition test taken on July 19 and was due to compete in the women’s 100 metres semi-finals here today.
She won her race in the heats yesterday but was informed of her suspension by the Athletics Integrity Unit (AIU) this morning.

The AIU had already banned 10 Nigerian athletes from Tokyo 2020 as they were not tested rigorously enough in the run-up to the Games.
After this was revealed, Okagbare hit out at sports governance in Nigeria, saying: “I have said it before and I will say it again.
“If you do not know the sport, not passionate about it/us [the athletes], then you have no business there as an administrator.
“The sport system in Nigeria is so flawed and we athletes are always at the receiving end of the damages.”
Thirty-two-year-old Okagbare won Olympic silver in the long jump at Beijing 2008.

At the 2013 World Championships in Moscow, she won long jump silver and 100m bronze, while she won the 100m/200m double at the Glasgow 2014 Commonwealth Games.
Okagbare is a multi-time African champion.

Blessing Okagbare won her heat in the 100 metres at Tokyo 2020 yesterday.

“The Athletics Integrity Unit has provisionally suspended Blessing Okagbare of Nigeria today with immediate effect after a sample collected from the sprinter tested positive for human growth hormone,” the AIU said.
“Growth hormone is a non-specified substance on the 2021 World Anti-Doping Agency (WADA) prohibited list and a provisional suspension is mandatory following an adverse analytical finding for such substance under the World Athletics anti-doping rules.
“The AIU collected the sample from Ms. Okagbare during an out-of-competition test on 19 July.
“The WADA-accredited laboratory that analysed the sample notified the AIU of the adverse analytical finding at midday Central European Time yesterday, Friday 30 July.
“The athlete was notified of the adverse analytical finding and of her provisional suspension this morning in Tokyo.
“She was scheduled to participate in the semi-finals of the women’s 100m this evening.
“The AIU will make no further comment on this matter at this time.”

Efia Odo just noted that her mentality differs from Ghanaians

8 Things Men Do Only For The Woman They Really Love.