Following the race, her guide, Manuel Antonio Vaz da Vega, grasped her right hand, got down on one knee and produced an engagement ring. 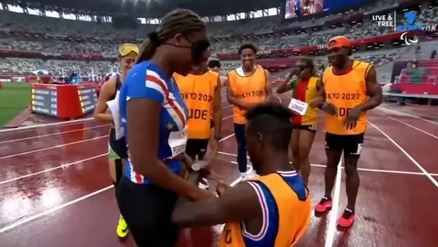 A Visually impaired runner got a ring after a 200-meter women’s race at the Tokyo Paralympics.

Keula Nidreia Pereira Semedo of Cape Verde finished fourth in her qualifying heat, but she ended up with something even better than a gold medal.

Following the race, her guide, Manuel Antonio Vaz da Vega, grasped her right hand, got down on one knee and produced an engagement ring. 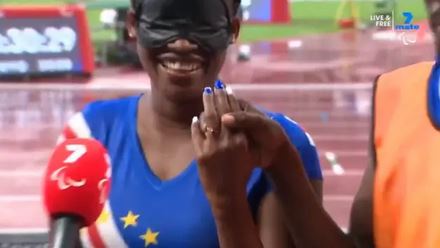 Semedo, 32, tearfully accepted the surprise proposal and the two shared a hug as their fellow competitors applauded.

Visually impaired runners compete with a partner who is attached to them via a small tether, so Semedo and da Vega already had become a tight-knit team on the track.

“May the two of them run together for life! ❤️” the official Paralympics account tweeted.

READ:  Revealed! How Doctor Who First Treated Buhari's Son Yusuf After His 2017 Accident Was Pushed To Commit Suicide

She showed off her engagement ring as the guides for the other runners in the race explained to them what was happening, resulting in them breaking out in smiles and applause.