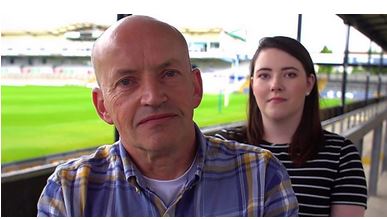 Neil and his daughter, Millie

A British man who used to be a racist has opened up on how he told his daughter that she can’t bring a black man home.

Neil who disclosed this while speaking in an interview with the BBC ahead of England’s World Cup qualifier against Hungary on Thursday September 2, said his daughter gave him a look of disgust when he said this.

READ:  BBNaija: Yerins breaks down in tears as eviction night draws near

The British man who is now anti-racist, admitted to casually using the N and P-words in everyday conversation and said that he was ‘basically a bigot’.

He recalled joining in racist and homophobic chants at football games, and said it ‘normalised’ racism in other walks of life.

Neil’s daughter, Millie struggled with his attitude to people of a different race. She said;

‘One of the things he used to say was: “You can’t have a black boyfriend. Don’t bring a black boy home”.


‘Or we’d walk past people who were selling the Big Issue and it would be: “We only buy them from English people, because they can just go home and be homeless there.”

Neil is now  ‘much closer now’ with Millie after she challenged his behavior. He said;

‘I think it was probably seeing the look of disgust on Millie’s face when I made comments.

‘I don’t really want to be that sort of role model for her – being a racist, a sexist, a homophobe, basically a bigot isn’t what I want to show Millie when she’s growing up.

‘I try to teach other people, the way that Millie’s taught me.’