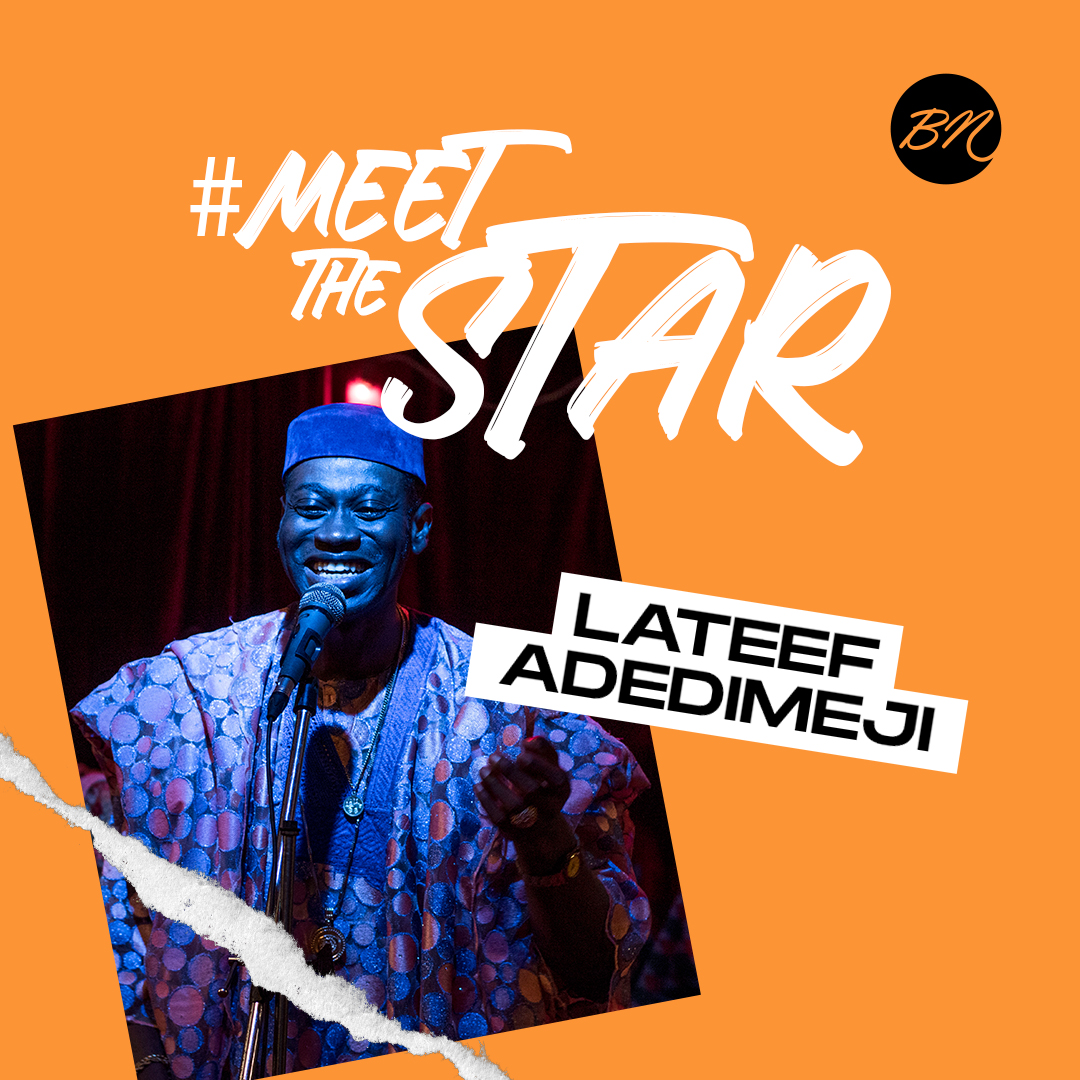 Lateef Adedimeji is living a dream that most young actors never get to experience: playing Ayinla Oniwura in a film directed by the renowned Tunde Kelani. Lateef, a graduate of mass communication, has been consistently working on stage and television since graduating years ago, but his recent role is absolutely fantastic.

“For me, acting is a religion, and I treat it as if my life depends on it,” he says. 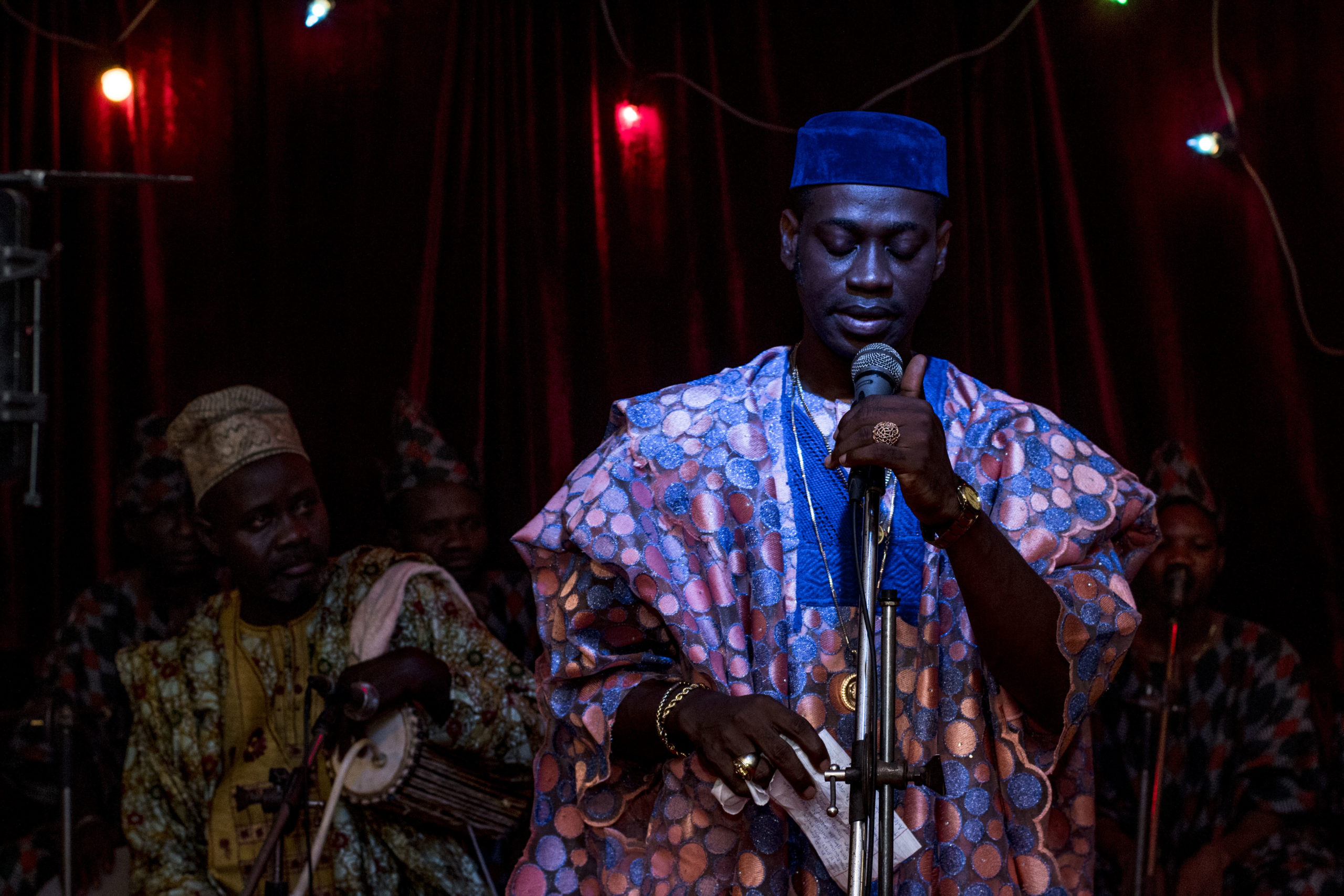 Lateef has an excellent performance as the lead in the musical release “Ayinla,” in which he plays the character of Nigerian musician Ayinla Oniwura, who utilized Apala music to address concerns of current society, commending and condemning different governmental and individual activities.

Lateef Adedimeji had a chat with us recently to discuss his latest labour of love.

Tell us how you first got your role in “Ayinla”

Jade Osiberu reached out to me and said there was a script and she felt I should play the role of the lead character. I was like ‘ok, that’s fine. Just send me the script, let me go through it. ‘ I didn’t think that it would be Ayinla. I went through the script. I actually loved it, so I told her I would be willing to be a part of it.

Months later, she told me Uncle Tunde Kelani would be directing. That name alone brought me so much joy. It wasn’t even a ‘waka pass’, it was more like a major role coming to me. It was a happy moment for me, and after some time, TK reached out to me and called me. I had to go to Abeokuta to meet with him. He told me about the story of Ayinla and gave me a lot of books to read. He said this is not a job I have to merge with other jobs. I need full concentration on the job, so I can get it done and I can put my best into it. Here we are now. We got to set. We did it. It came out nice. 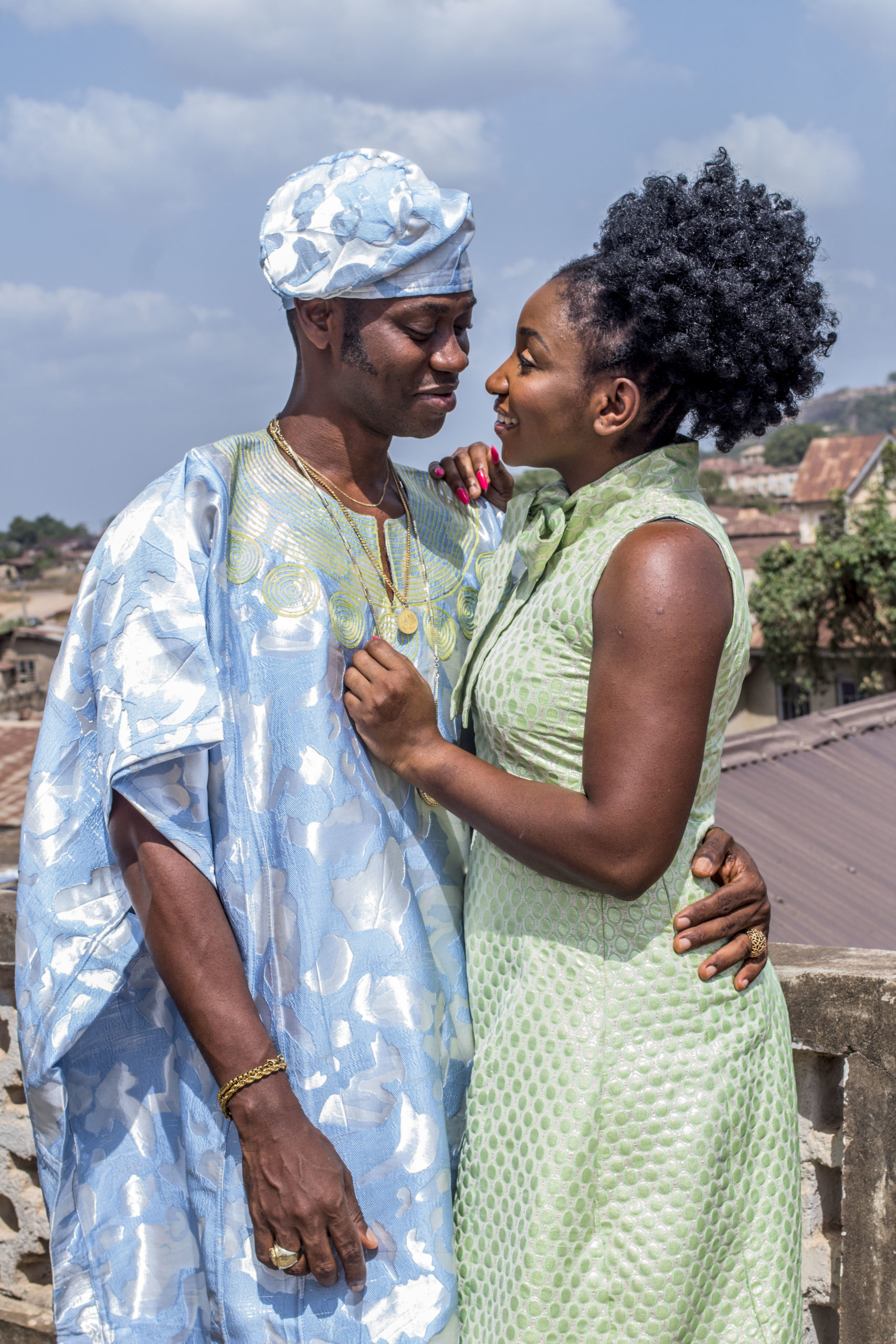 Once you were cast, how did you prepare for the role?

Immediately after I got cast for the role, it was a lot of work. TK made me do a lot of work. He gave me books to read, told me stories about Ayinla, and asked me to ask people about him. No documentation of Ayinla, no video recording, nothing for me to sit and watch and get his way of talking, walking or his mannerisms. It was me building up all of those characterizations and mannerisms from what I’ve heard and read about him.

Let’s talk about yourself. Who is Adedimeji Lateef?

My name is Lateef Adedimeji. I’m an actor. I’m from Ogun State. I’m a Muslim. A graduate of Mass Communications from Olabisi Onabajo University. Well rooted and modelled into the world of acting by a non-governmental organisation, a community like a project way back in 1998/99. That’s when I started with them. We basically pass information to the grassroots people through acting, dance, and songs. They train young people through eighteen topics to become peer educators and counsellors so that we can talk to the youth about sexuality issues, HIV/AIDS, and drug abuse. That’s where my grooming started.

I’ve been making movies even while in school. When I finished school, I produced my own first movie, “Ose Regi”, in 2007. Acting is a religion to me, and I take it like my life depends on it. 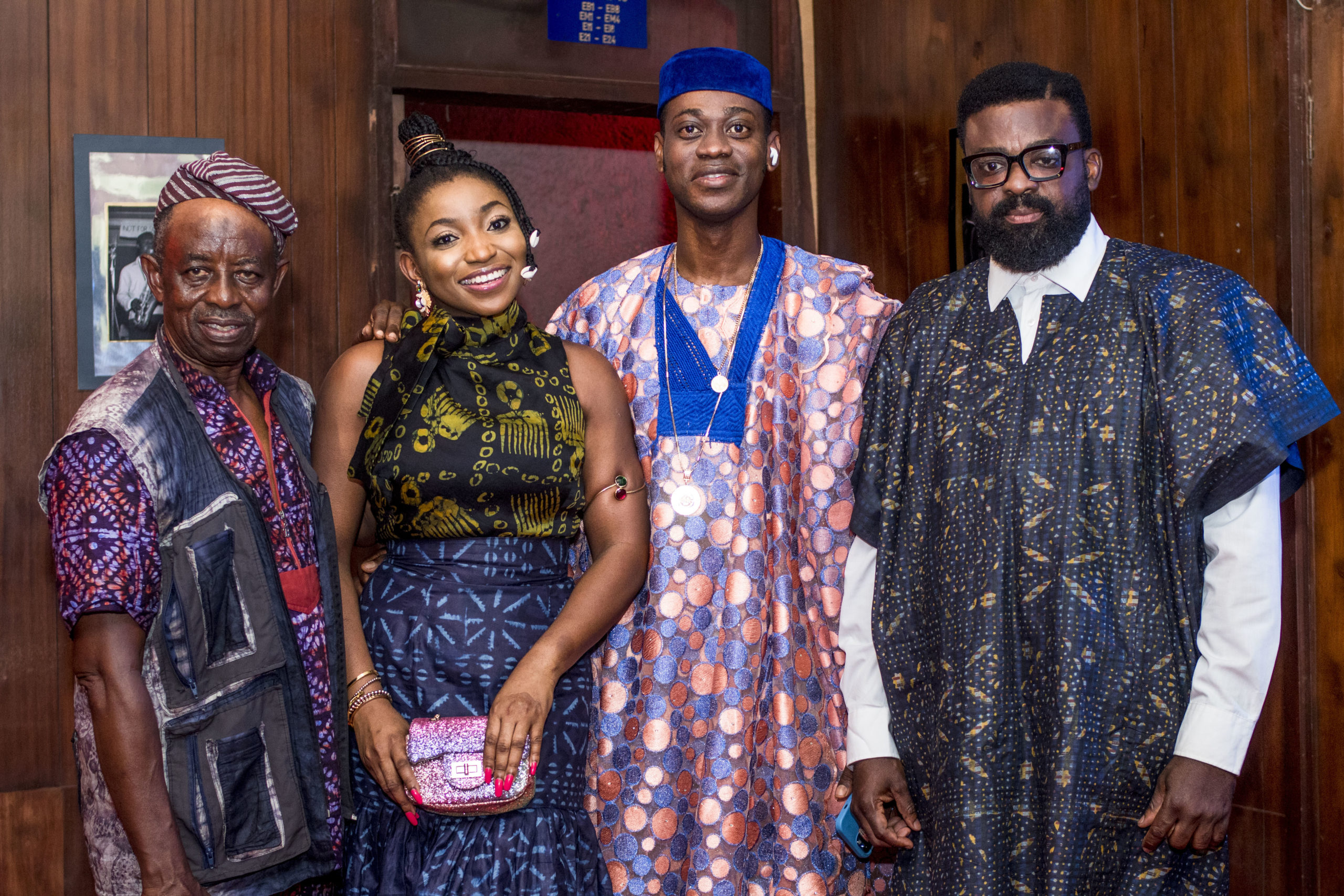 Shooting Ayinla was a new learning process for me. So much to learn from Tunde Kelani, Jade Osiberu, her style of producing, TK’s style of producing. I picked something great from everybody on that set. It was a beautiful moment. I’m glad I was able to hold on to the job. There’s a lot I learned.

Would you say that acting is a question of instinct and talent rather than something you can learn?

Acting is a question of instinct and talent, but it goes beyond talent. It’s more like you have a talent and you are not nursing it, you are not developing it. You have a seed that you put in the ground and you want it to germinate. You don’t check on it, water it from time to time, before it starts germinating.

You have a five-yard Ankara with you. You have to give it to a tailor to cut it into what you want and what you have imagined, so people can appreciate it on you and ask who sewed it for you. It’s more like you have the talent, but it goes beyond having the talent and instinct. You need to learn and mould your talent into what you want.

Tell us about working with the great Tunde Kelani and Jade Osiberu?

Working with Baba Mi and Jade Osiberu was a dream come true. Baba Mi is someone I’ve always wanted to work with, and it was a whole learning process for me, a new one entirely. Baba treated me like a son, even as an actor, always telling me what to do, always telling me not to play too much, so I didn’t lose the characterization.

Jade, always on point, always ready. This is one producer who knows what she wants and if she’s not getting it, then you are not doing it. It was beautiful to work with them.

Who are some of the actors that you’ve worked with that have had a profound influence on you?

Everybody on the set was amazing. From Debo (Mr Macaroni), Omowumi Dada, Ade Laoye, Bimbo Ademoye, Jumoke Odetola, Uncle Bimbo Manuel. We were like one big family, and at times when I felt, ‘oh my God am I going to be able to deliver this song’, they would be right with me and tell me to ‘keep singing, you will get it done. There was too much love around us. Because of the love, we all made the job very easy, and it came out all nice. It was great. 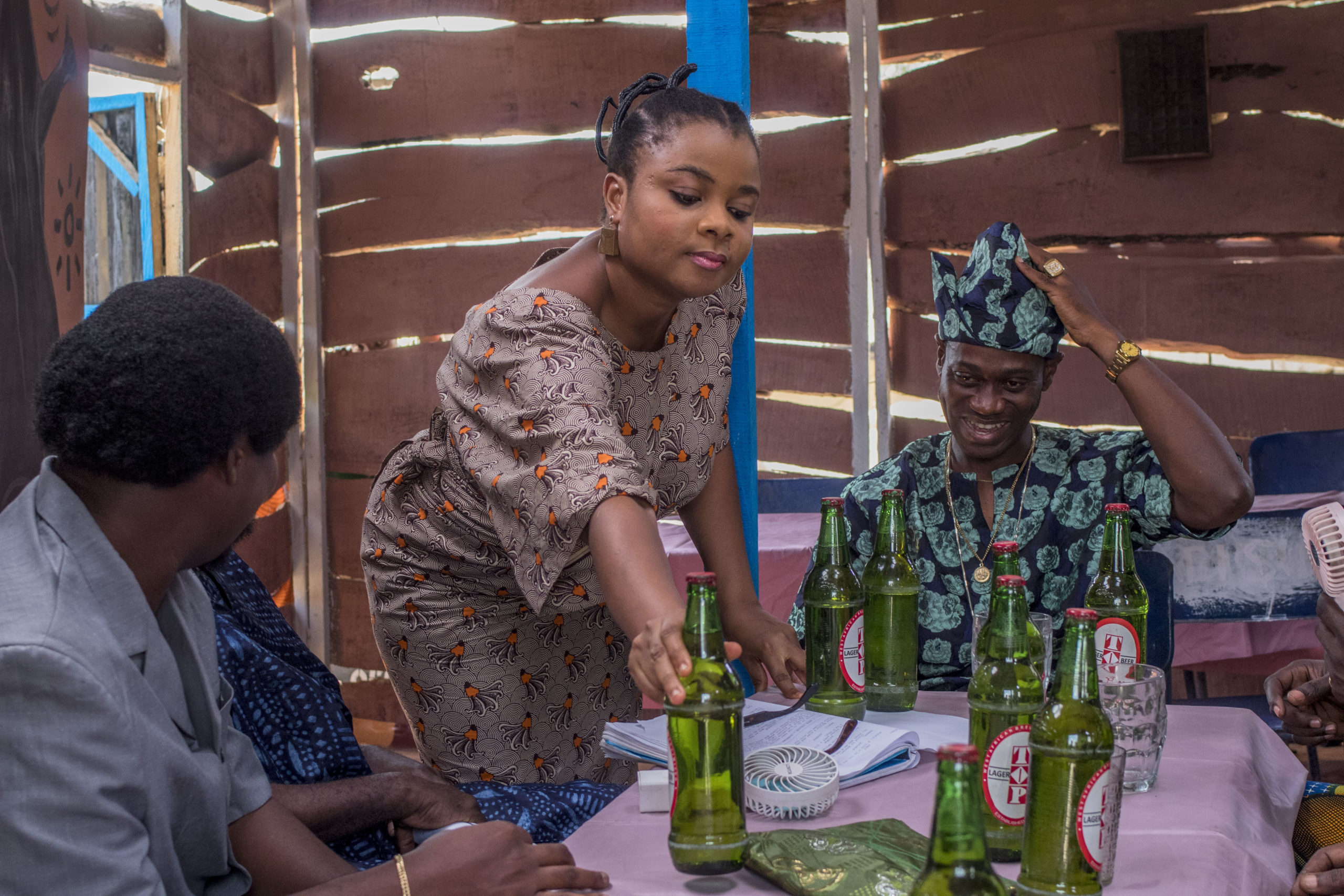 Did you learn anything from “Ayinla”?

I learned a lot from Ayinla. I learned a lot about fame, anger, handling pressure, and dealing with people. I learned that fame is a crazy thing that you need to take your time managing, else fame will kill you despite the talent you have inside you. I learned sincerity and versatility. It was a beautiful story and it was just a plus for me to learn more about life.

If you were allowed to pick a character to play for a biopic, who would that be and why?

Any character at all? After Ayinla I did, Ige, the oil merchant, with Biodun Stephen, the Fakorede story. Another biopic is on the line for me. I love the fact that there’s a lot to learn from people who’ve been there, using their stories to teach. I will be willing to do a King Sunny Ade, Fela, Barrister, whichever way it comes, any biopic at all.

I Don’t Owe Anybody, Even Menzgold Owes Me Too – NAM1 Replies Ghanaians Chasing Him To Pay Back Their Money.